I still have my garden but it's not as big as it once was.
These days I have to devote more time to working due to the high cost of living on Maui.
However, I wouldn't trade Maui for anywhere else in the world! 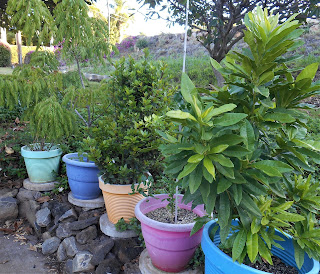 The leaves of culinary trees add dimension and flavor to many dishes.

Bay leaves are the most common culinary leaf that's used in America. Bay Laurels actually grow into a large tree but can be grown successfully in a 15 gallon or larger container. Their roots seem to be comfortable in a confined space and it doesn't affect the quality of the leaves like it does with citrus. 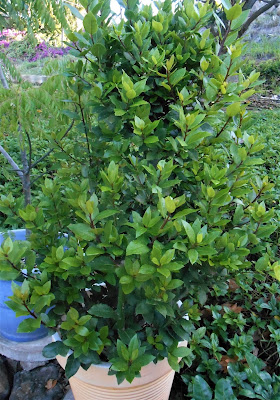 My bay laurel has been growing in a 15 gallon container for over six years. If I don't prune it for a few months the branches will grow well over 6 ft. I keep it trimmed so it produces new fresh leaves. It's been low maintenance and heat and drought tolerant. I fertilize the container once a month and this tree is very forgiving if I forget to water it.

Bay laurels are grown from cuttings. I purchased my seedling plant from
Kula Hardware and Nursery. 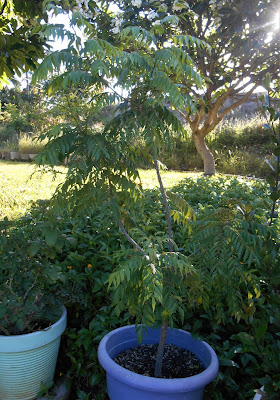 Curry leaf trees can be planted in the ground as well as a large container. I've found they outgrow a 15 gallon container in about two years and begin to produce poor quality leaves. They produce a lot of seeds in the summer and fall so it's easy to start a replacement tree.

Curry leaf trees are native to southern India and they're very compatible with the Kihei climate. The trees can be grown from seed when they are very fresh. It can take them several weeks or more to germinate and they grow slowly during the first few months. They're heat tolerant but not very drought tolerant and need a lot of water during our hottest months as the tree will wilt without adequate water. 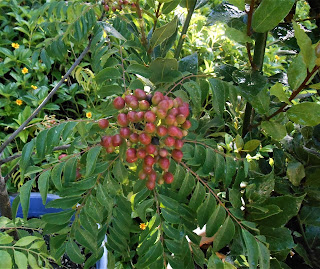 If you don't have access to fresh seeds, it's easier to grow a Curry Leaf tree from a seedling plant. They're available on Amazon and ebay. 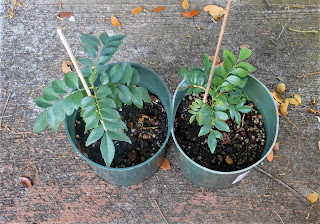 If you live on Maui I usually have several seedling plants that I can share if you would like to grow one. My email is in the "About My Blog" on the upper right side.

Some of Ottoleghi's popular cookbooks have recipes that include curry leaves. 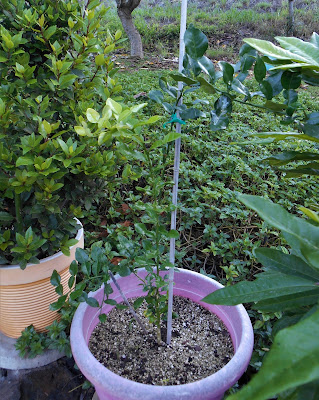 Lots of Growth
16 months from germination

Kaffir lime trees are grown for their unique leaves which are used predominately in Thai cuisine. These trees are smaller than other citrus and can be grown in a container for several years before their roots become too stressed. They aren't as heat tolerant as other citrus and struggle during our hottest months with tip burn and curled leaves. 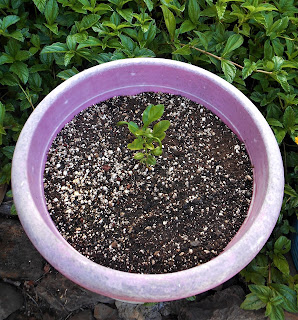 It takes a  l o n g  time to grow a kaffir lime tree from a seed. The seeds have very low and slow germination and seedling plants grow very slowly during their first year.

I purchased a kaffir lime tree from Ki-Hana Nursery and planted it in a 30 gallon container. It produced limes during the second year. After three years the tree became too stressed to produce good quality leaves or fruit due to it being confined to a container. This seedling plant was the result of seeds I planted from one of the limes.

Kaffir lime trees need adequate water but they are more drought tolerant than a curry leaf tree.
Posted by Jane at 8:29 AM