In Kihei, corn can be planted at any time during the year. It grows rapidly but requires adequate water and a well amended soil to develop properly. 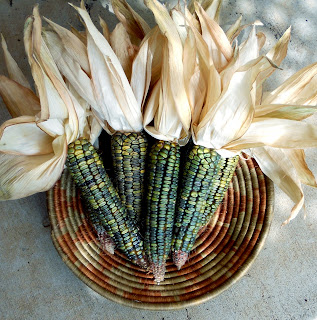 When I started my garden in 2008 I didn't have much success growing corn. It took a while to build a soil it would grow in. I dug a 55 sq ft garden bed 1 ft deep and periodically added compost and an OMRI chicken manure, as well as cover crops to the bed. Over time, the soil improved and the corn began to grow a lot better. 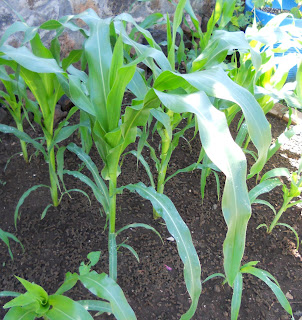 I've spaced the seeds as close as 12 in. and as wide as 18 with similar results. The above photo shows the Oaxacan Green spaced at 12 in. Most varieties of corn grow 5 to 7 ft tall and produce 1 to 3 ears per stalk. Corn pollinates better when planted in a block rather than a row of single plants. 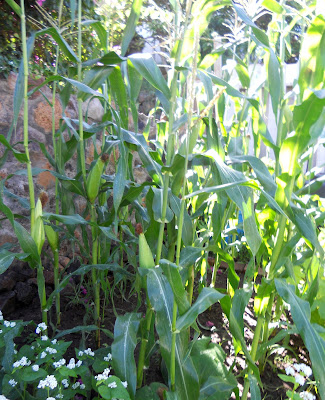 Fresh corn is ready to harvest at about 9 weeks when the exposed silks turn brown. Corn used for flour and hominy (prepared by nixtamalization - cooking the dried kernels in pickling lime) is left on the stalks to dry. Oaxacan Green Dent corn is traditionally cooked as hominy and ground into masa for making tamales and tortillas. 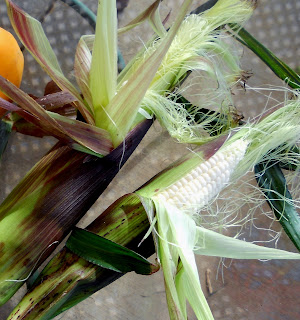 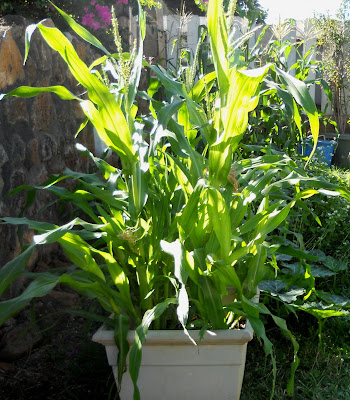 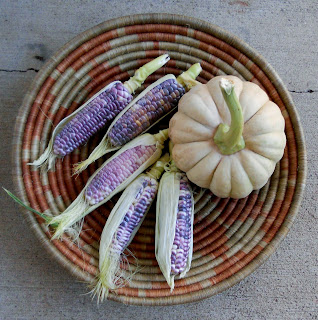 Blue Jade is a variety of miniature corn that can be grown in a large container. The stalks grow 3 to 4 ft tall and produce small 4 to 5 inch ears. This is the first year I've planted Blue Jade. I planted 4 seeds per container and spaced the seeds 6 inches apart. I thought that might be too close but the corn grew well and produced 2 ears per stalk..

There are so many varieties of corn and it can be grown as a grain or a vegetable. If you want to avoid GMO corn or corn that may have been contaminated by GMO pollen, it's best to purchase from reputable seed sources that test their seeds.

If you live in Kihei, keep in mind that Monsanto is growing seed corn in the cane fields adjacent to Kealia pond on the mauka side of North Kihei Road. Corn pollen can travel for miles in the wind and there is a chance of cross pollination.

Corn Crossing, an animation, provides an explanation on how to pollinate and protect corn for seed saving. Corn Shoot and Corn Tassle bags can be purchased from Seed Savers.

What You Need to Know About Corn
Describes the difference between dent, flint, parch and sweet corn.

The History and Evolution of Corn