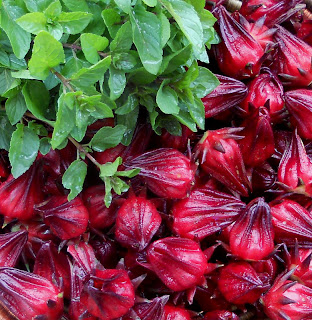 Roselle is a type of hibiscus that's very easy to grow in Kihei. Roselle tea is popular in Florida, Jamaica, Mexico and Thailand. Roselle is one of the main ingredients in Red Zinger tea - it's also called Red Hibiscus or Florida Cranberry.

Roselle is commercially grown in sub-tropical and tropical areas of the world. In addition to being grown for tea and beverages, the plants are used for making rope, twine, baskets and a course fabric.

In the sub-tropics, Roselle is moderately sensitive to increasing and decreasing daylight but it can be grown year round. Regardless of the month it's planted, it will take close to 3 months before the plant begins to flower and produce calyxes. I've planted Roselle at different times of the year and I think the best months to plant seeds are February through April. When planted in the spring, the plants grow larger, fuller and produce good size calyxes all summer long. 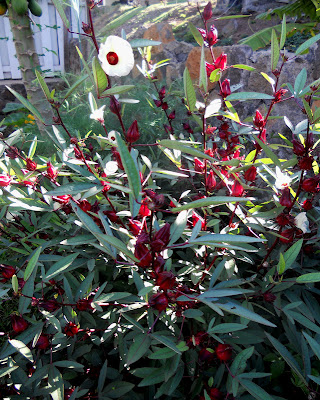 The calyxes should be cut when they're a bright, shiny cranberry red and about 1.5 to 2 inches long. If left on the branches too long, they begin to dry and turn a dull, dark red but these can be harvested for the seeds. The calyxes can be used fresh cut from the branches or dried. If you're growing Roselle for tea , after the calyxes are harvested the seed capsule should be removed.

Fresh Roselle can be chopped and added to salads or ground in a food grinder and made into chutney or marmalade. Fresh or dried Roselle can be used for making tea - it has a citrus like flavor and it's a good source of vitamin C. 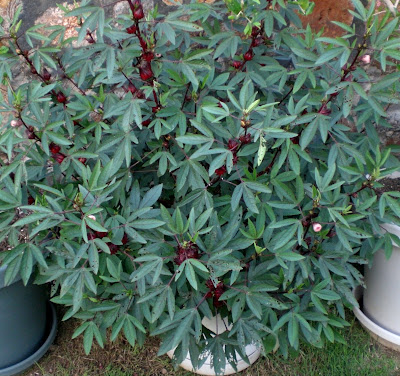 In Early July
At 3 months - growing in a container

I've grown Roselle in the ground and in containers - it grows into a large bush - up to 5 ft. tall and 5 ft. wide. The plant above was grown from seed that was planted during the first week of April and is growing in a 20 gallon container. Roselle is a plant I've been able to grow successfully in the acidic Kihei soil but it does require a generous amount of compost and organic all-purpose fertilizer mixed into the soil in order to thrive. 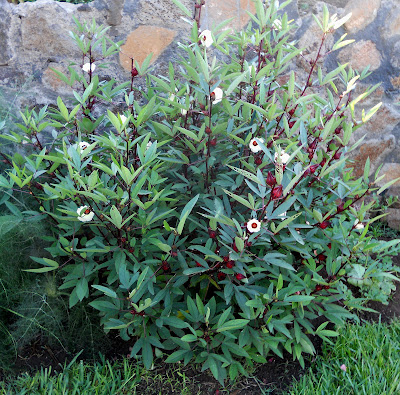 In Early July
At 3 months - growing in the ground

Whether planted in a garden bed or planted in a container, I recommend adding a generous amount of an organic all-purpose fertilizer at least once per month. Mature plants require a significant amount of water in our hot, dry climate especially during the summer months.

The seeds that were planted in April produced an abundance of calyxes all summer long. By October there were significant changes as the plants began losing leaves and producing calyxes that were 50% smaller. These calyxes went to seed much faster than those produced during the summer. 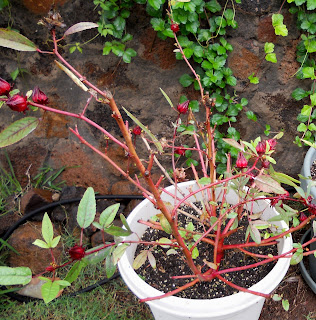 In December, the plants began dying back. A 9 month growth cycle has been typical when planted in different months of the year.

In general, Roselle is pretty hardy but it can be damaged by powdery mildew when there's a large presence of spores in the air. Sometimes the beetles (there are several including the rose beetle) eat holes in the leaves but they don't seem to bother the calyxes.

Roselle: It's Culture and Uses
(published in 1907)

All About Roselle
Health Benefits of Roselle 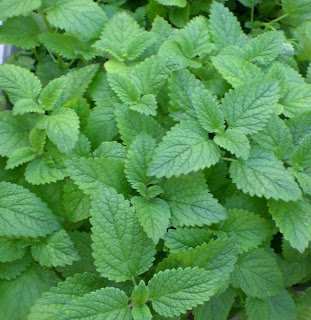 Lemon Balm is a member of the mint family - it's easy to grow from seed in a container and can be grown all year. Like most mints, it's a perfect cut and come again plant. I normally don't let it grow tall enough to flower as I like to cut it and use it fresh to make sun tea. Lemon Balm seeds are widely available. 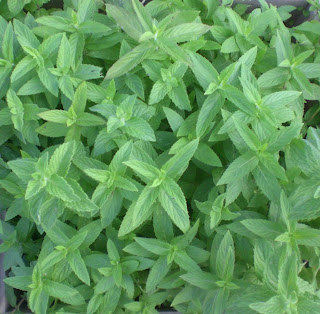 Arabian Mint is one of the mints I've grown from seed. It's a beautiful variety of mint and I use it when I cook Middle Eastern and Moroccan recipes. It has a spearmint flavor and it makes delicious Moroccan mint tea. 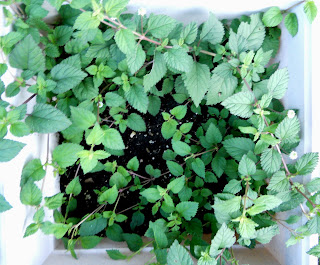 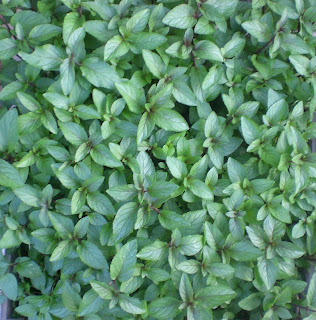 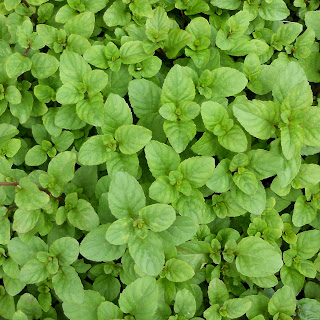 Peppermint, Orange Mint, Chocolate Mint and Pineapple Mint can be grown from cuttings. They can also be purchased as seedling plants at local garden centers. I've not been successful at having peppermint seeds grow as true peppermint. So far, all the peppermint seeds I've trialed have grown spearmint flavored plants.

When planted in the ground or in a raised bed, mint is very invasive. Mint can be grown all year in Kihei but it germinates best from seed during the cooler months. Mints grow well in containers and can be grown as a cut and come again plant. I fertilize the mints with fish emulsion once a month. 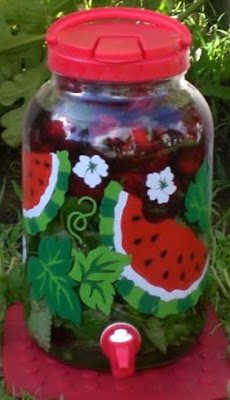 I like to make sun tea with fresh or dried Roselle adding Lemon Balm, Orange Mint or Peppermint and fresh sliced ginger. Sometimes I add the dried peels I've save from my tangerine trees instead of ginger.