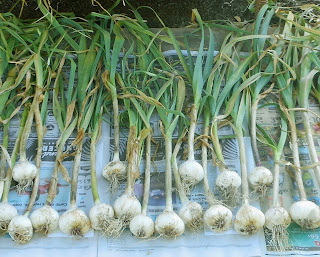 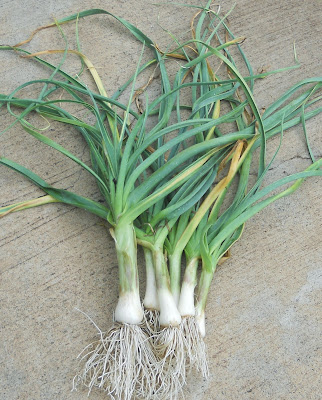 In September of 2009 I planted 4 varieties of hard and softneck garlic in Keonekai and they grew fairly well through the spring. In early June, at 9 months, the tops were looking like onions do at the end of their growth cycle. I harvested all of the garlic but none had developed bulbs. Green garlic is still garlic even though it looks like a small leek. 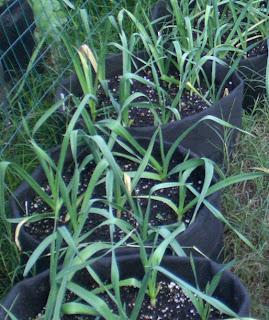 I continued to trial different varieties each fall. I even varied the planting dates from September through November but the results were the same - no bulbs. 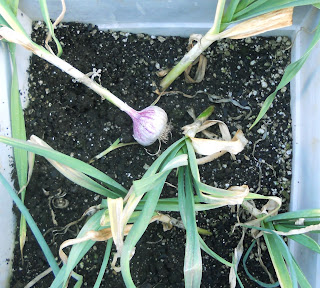 In November of 2012 I moved to the 600 ft elevation in Maui Meadows. Since I was only planting "green garlic" I planted the garlic in late November and early December. In April, at just about 4 months, the Thai Purple stalks were skinny and dying back and I pulled them out. It was a jaw dropping moment when I saw a large purplish garlic bulb at the end of the stalk.

Maui Meadows is about 5 degrees cooler than the Keonekai area of Kihei. From January until March I tracked the temperature at dawn and it ranged from 58 to 64 degrees. The day-time temps were in the high 70's to low 80's. It's amazing what a 5 degree
difference has made for my winter garden.

After I receive my garlic orders in the fall I keep the seed garlic in my refrigerator until I plant them in late November to early December. This is the key to having
successful bulbing in this climate.

In Kihei garlic usually needs daily water. I've only planted garlic in containers and so far it hasn't been bothered any diseases. However, slugs will eat at the leaves and I spread slug and snail bait around the containers.

For information on when and how to harvest bulbing garlic, I recommend reading
Daphne's post How to Grow Garlic 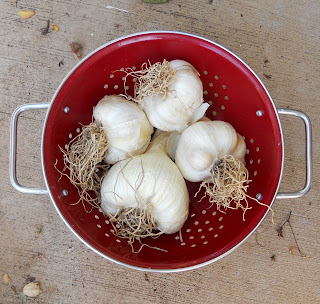 Elephant appears to be the only garlic being grown commercially in Hawaii at Kupa'a Farms.

The Story of Elephant Garlic and a Recipe 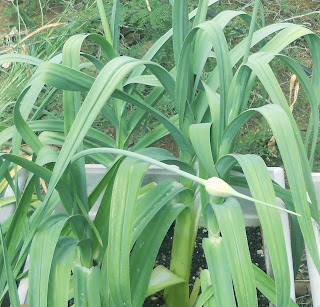 Elephant is the only variety I've grown that produced garlic scapes. Scapes were best cut soon after they emerged - if I let them grow a few days they became tough and fibrous. I removed the flower bud, cut the scapes into 1 inch pieces and sautéed them in olive oil. 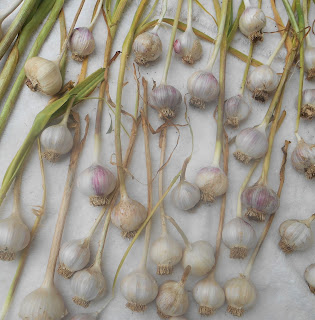 In December of 2013 I planted several varieties of creoles, turbans and a French artichoke. Creoles and turbans are recommended for the southern USA. Thermadrone (French artichoke) and most creoles appear to be a very good match for Maui Meadows. Creoles are small in comparison to Thermadrone and Thai Purple. 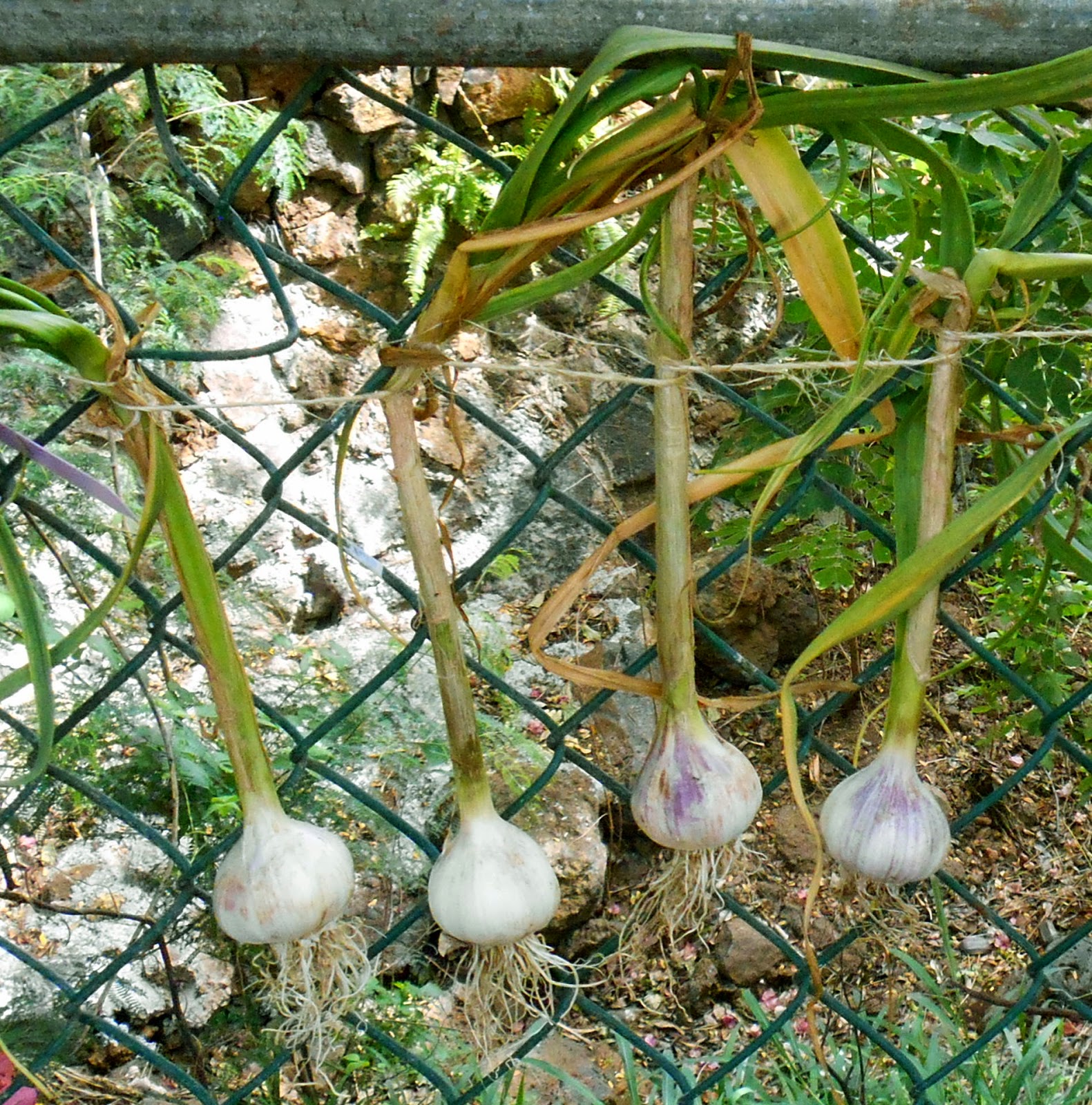 Like onions, garlic needs to dry in order to store it. I strung the bulbs on a wire
boundary fence under a shade tree. 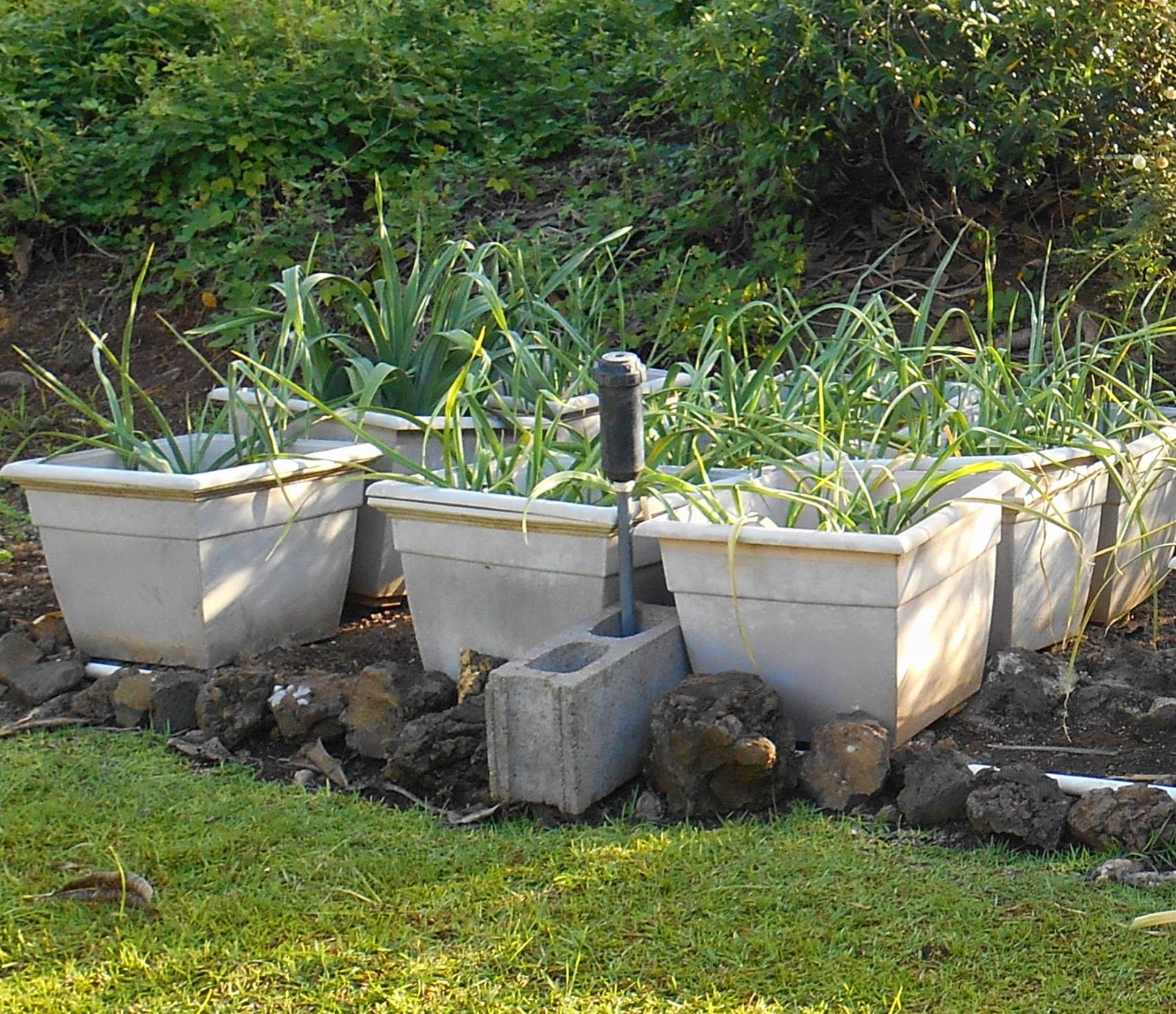 Elephant, Thermadrone and an assortment of Creoles
(2 months)

In Maui Meadows garlic is a fast crop as we don't have a period of cold weather. So far, my best results were with Aglio Rosso, Ajo Rojo, Cuban Purple, Elephant, Germindor, Thai Purple and Thermadrone. Garlic generally needs 3 to 4 months. Elephant needs at least 5 months.

How to Harvest and Cure Garlic

After three years of growing garlic in Maui Meadows I've learned that refrigerating the seed garlic for at least one month is critical for bulb development. This is known as vernalization and without it bulbs won't form in our climate and the garlic will look like a small onion.

The Thai Purple, Thermadrone and Elephant garlic produced decent size bulbs and the creoles were smaller. Filaree Garlic Farm is the only source I've found so far for Thermadrone. In the fall I purchase organic Elephant garlic at our local Whole Foods.

Not all seed vendors will ship garlic to Hawaii.
I've purchased garlic from the following sources:

The demand for seed garlic has skyrocketed and some garlic vendors have their inventory available for pre-order as early as January. Another source with lots of great information about the history and different categories of garlic, as well as small farm sources for seed garlic, is Gourmet Garlic Gardens

Garlic from the market can be planted but the variety is usually unknown and might only produce green garlic. I recommend purchasing organic as much of the conventional (non-organic) garlic at the market is imported from China and Korea.

April 2022 Update: A few farms in Hawaii have been experimentally growing garlic:
Garlic Production in Hawaii
Hawaii Could Soon Have It's Own Garlic Industry
Posted by Jane at 6:30 AM