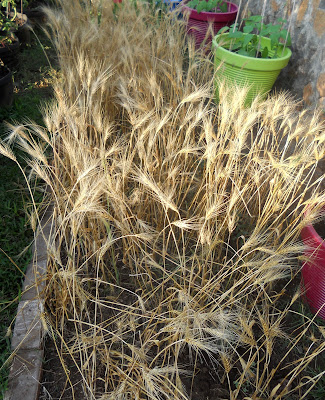 The Hawaiian islands are isolated and the majority of our food is flown or shipped over 3,000 miles. The county has stated that we have only 7 days of food available on Maui. In 2002 there was a short dock strike and it was amazing how fast that impacted the availability of food and supplies at the markets.

One of my garden research goals is to figure out what kind of grains and seed crops we could farm in Kihei in the event of a food shortage, or a catastrophe that impacted our access to non-local food. 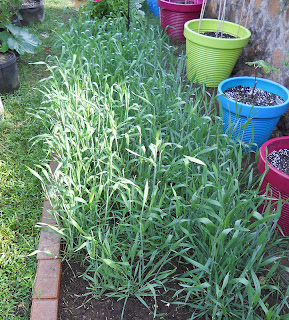 On the autumn equinox, I planted a 4 x 11 ft garden bed with Dylan wheat. Dylan is an organic, disease resistant, hard red spring wheat. It turned out to be a good date to plant wheat as it grew really well through the fall. 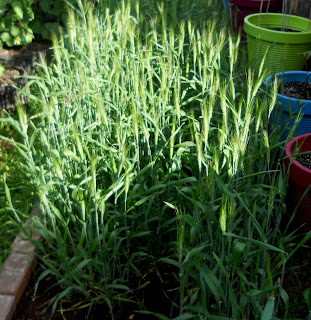 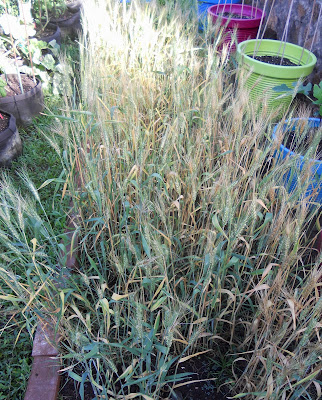 4 weeks after the awns had formed, the stalks began to turn brown. When they had turned about 50%, I stopped watering the bed and let them dry for almost 3 weeks. I was able to pull the dry stalks out of the ground easily.

It's a lot of work to clean wheat and I don't know of an easy way to do it by hand. There are quite a few You-Tube videos on this topic.

Dylan wheat is available from Bountiful Gardens. They provide enough seed in the package to sow a 100 sf bed. 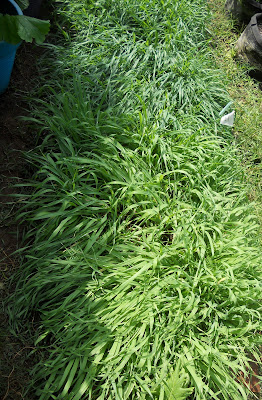 On January 20th, I planted Tibetan Purple Hulless barley and Wren's Abruzzi rye. Barley and rye are grown in cold climates. They grew well for about 6 weeks and then just prior to the time frame for forming the awns, they became stressed from the rising temps. I'm not sure I'll plant barley or rye again as I think it may be too hot to grow these grains in Kihei.

Barley has become a popular garden crop for home brewers. Sustainable Seed Company has a large selection of heirloom barley seeds from around the world. Unfortunately, most of the seed packs have only a small amount of seed.

Wren's Abruzzi rye is available from Southern Exposure Seed Exchange - they provide enough seed in their packages to sow a 100 sf bed.

Organic grains from the market can also be planted.