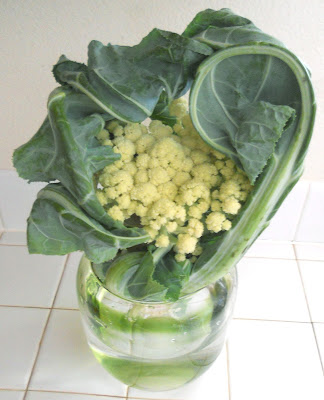 When I grew cauliflower in 2009 I planted seeds in late October. The plants didn't flower and as is typical of brassicas they began to succumb to heat stress due to the rising temps in March. I then read that cauliflower needs a period of 60 degree weather to produce a flower. In Kihei, night-time temps during late January to early February are in the 60 to 65F range but the days are usually in the 80s. 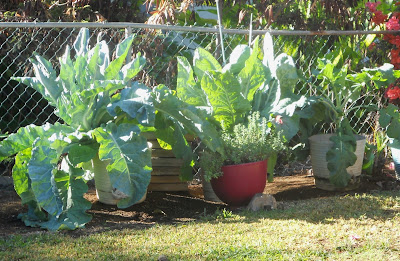 Then I learned that cauliflower could be grown in Maui Meadows. After growing cauliflower again I've concluded that the planting date is more critical than with other brassicas. 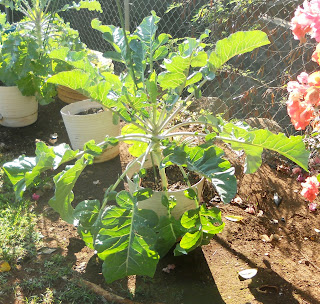 Most varieties of broccoli are ready to harvest in just over 3 months. Cauliflower and Romanesco need 4 to 5 months and ideally the flower should develop during our coolest weather - mid-January through mid-February. I usually start the brassicas in mid to late October but cauliflower should be started in late September. In moderate 4 season climates, cauliflower is predominately planted in August so the flower will develop during cooler weather. 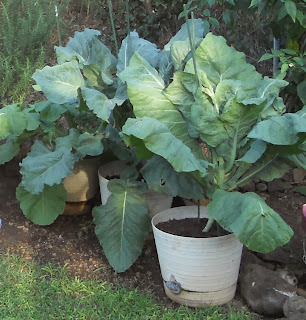 Cauliflowers are big plants and as they grow larger they need a lot of water especially in Kihei. The plants grow well in the large 10 gallon size self-watering containers available at Walmart. Self-watering containers can also be purchased with free shipping on Amazon. I recommend blocking the reservoir - I use a rolled up plastic bag - as the water can become a breeding ground for mosquitoes. Cauliflower needs a generous amount of an organic all-purpose fertilizer once per month. 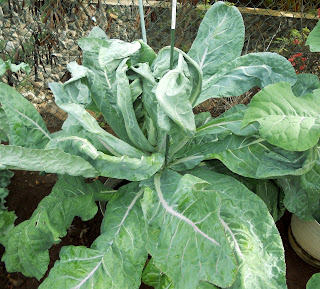 At 4 months the newly emerging leaves of Precose Tuscana (Early Tuscan)
began to twist and curl. Within two weeks a small creamy white flower started to develop. Some varieties of cauliflower are self-blanching and form these protective leaves. Once the flower begins to form it takes 2 weeks for the head to grow large enough to harvest.

After 5 months Violetta Italia didn't form a head - it may be too warm to grow it here. 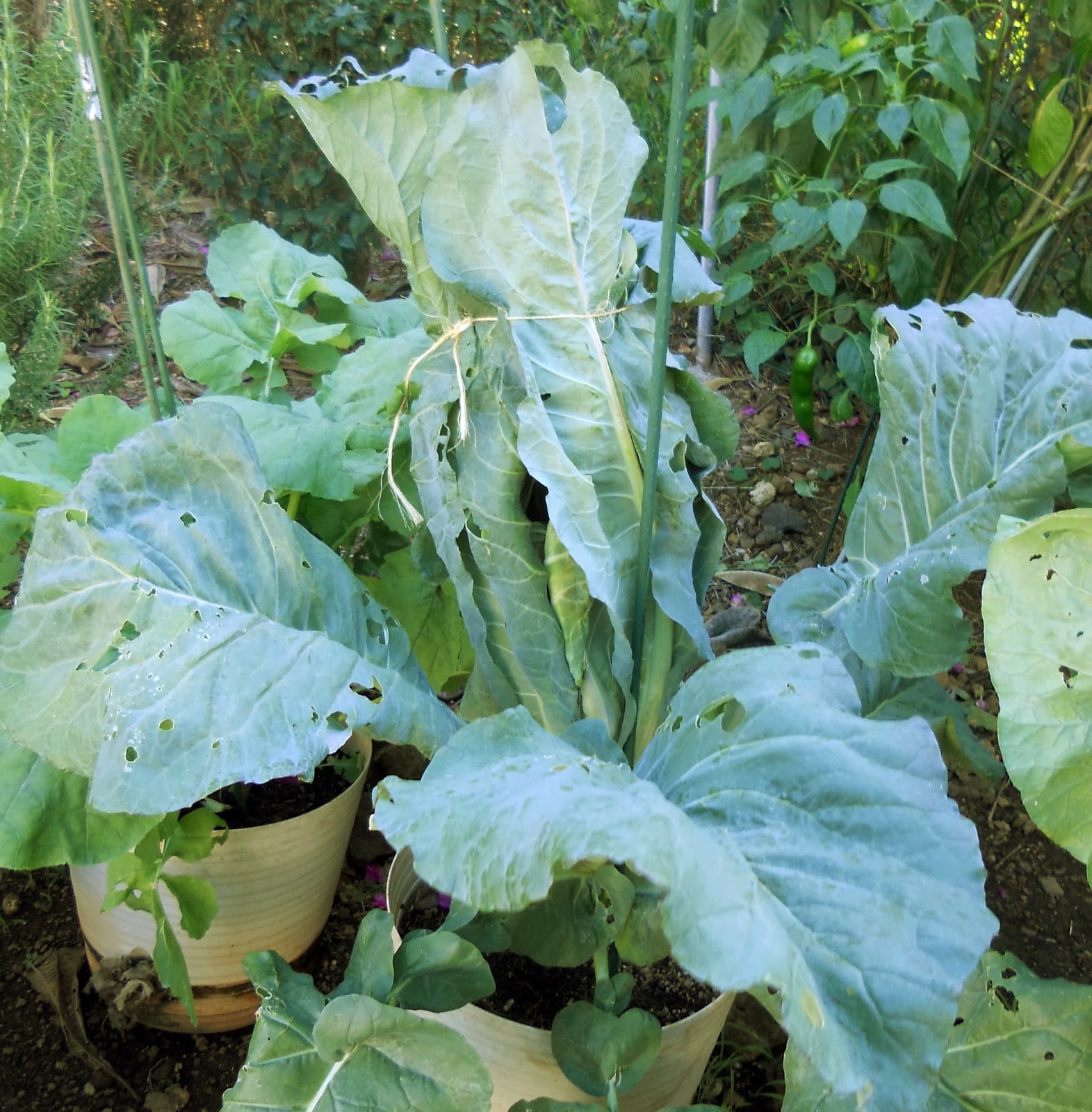 Sicilia Violetto formed vertical leaves rather than curled. They were long enough to tie a string around to protect the flower from the sun. 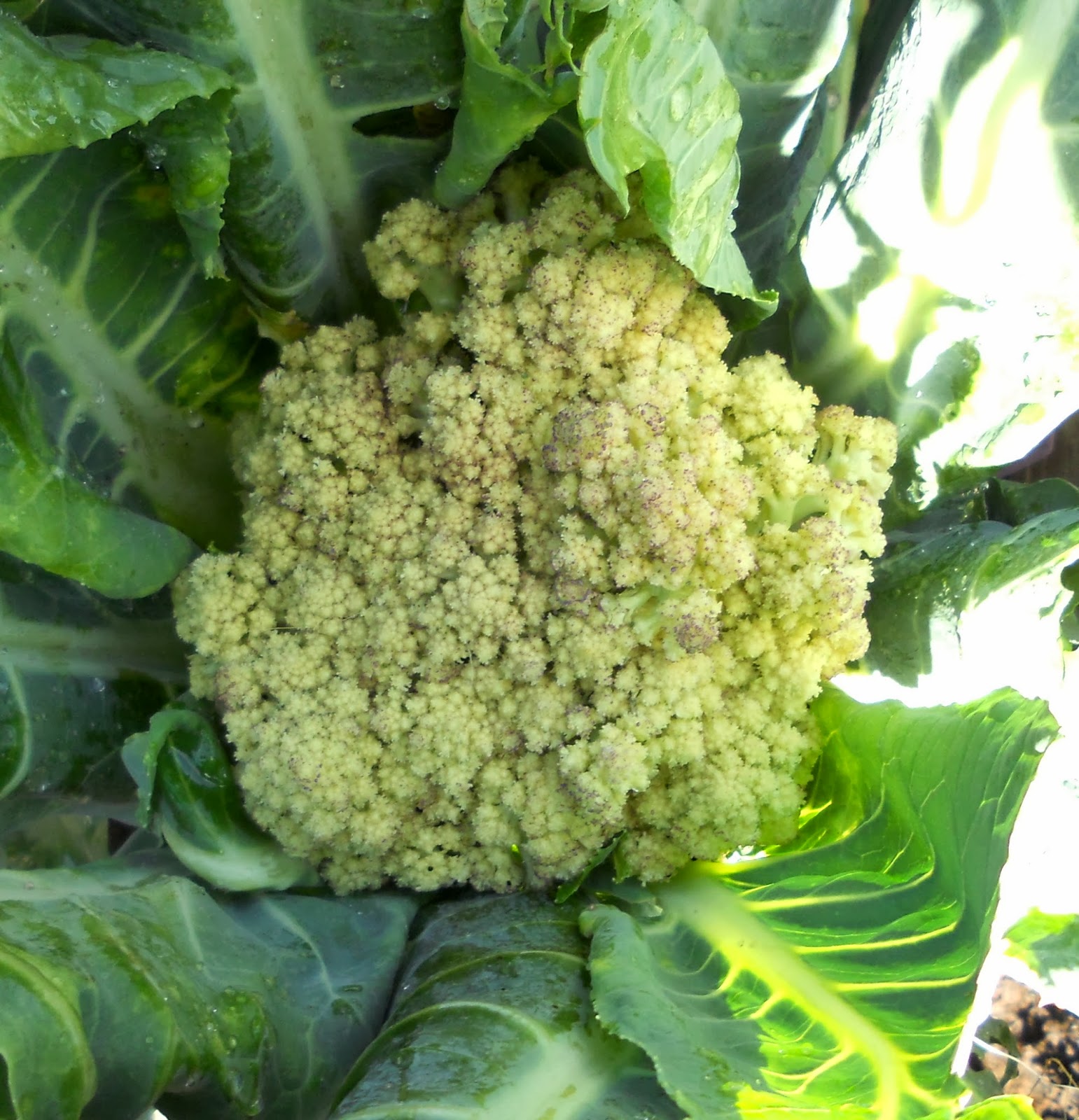 Sicilia was the earliest cauliflower I've grown. The flower above formed between 12/26/13 and 1/11/14 during a period of cool and windy weather when our nights in Maui Meadows were in the low 60's. It had a slight purple blush but it didn't turn purple. 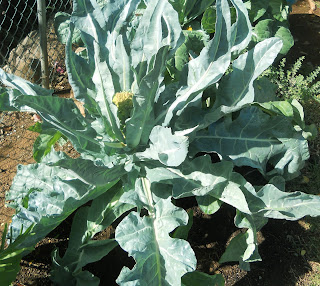 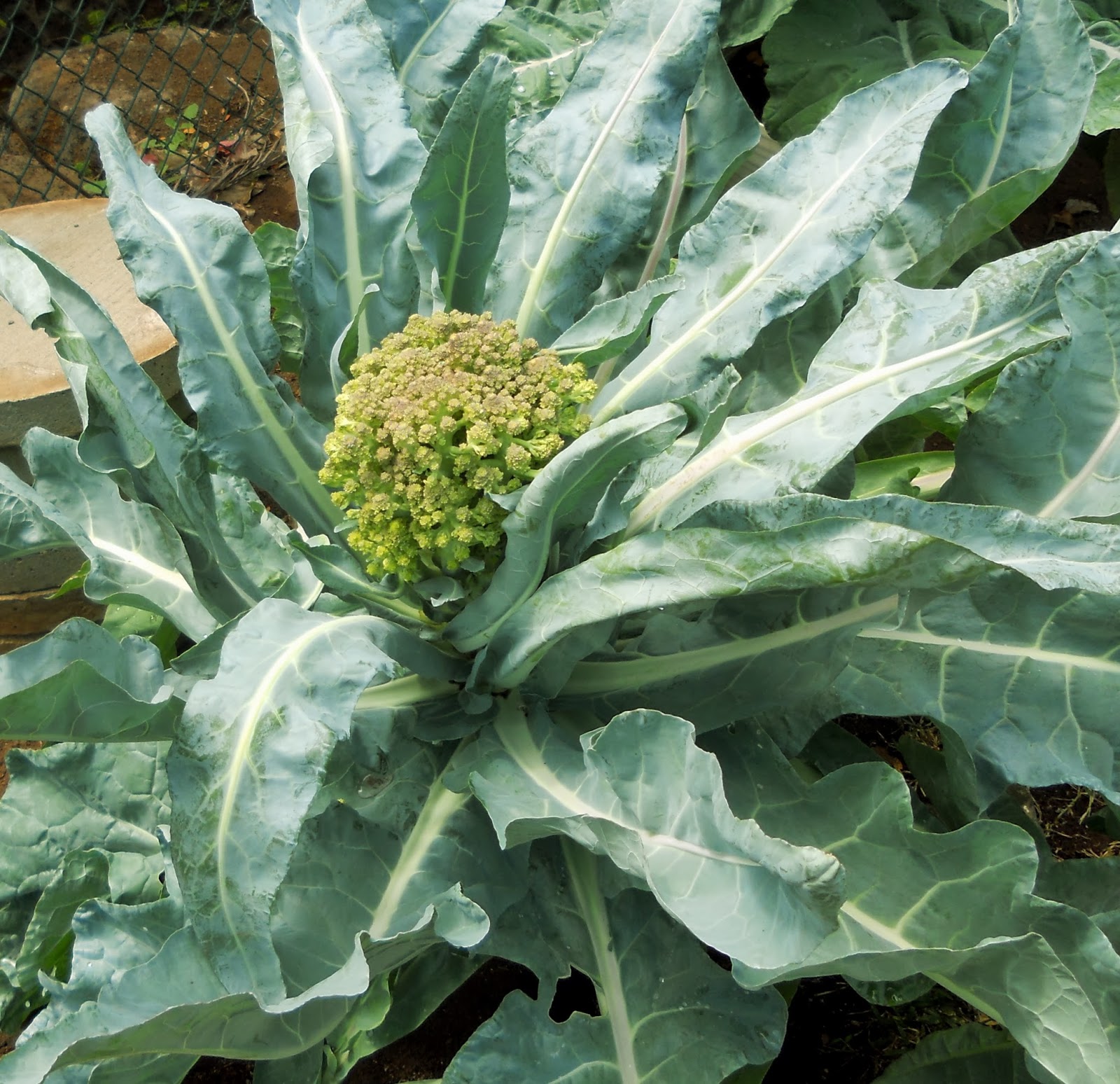 Depending on the source, Romanesco is classified as a broccoli or a cauliflower. In my opinion it's most similar to cauliflower. I think it may be too warm in Kihei to grow decent Romanesco. Although my plants formed flower heads they didn't produce the bright green fractal flower typically seen in seed catalog photos. Instead they were small, brownish and distorted. And, Romanesco Italia didn't form protective leaves or long enough leaves around the flower to tie together.

The major pest that attacks the brassicas is the cabbageworm. I keep the cauliflower under a row cover with the cabbage for the first two months or until they're too large to contain. Last year they were hardy enough at 2 months to grow uncovered and withstand moderate cabbageworm damage. This year they were severely damaged by cabbageworms and I'll have to make individual tulle tents for them next year.  Slugs and snails also eat cauliflower leaves - I use a product for organic gardens to control them.

I planted cauliflower in the fall of 2009, 2012 and 2013. The white varieties appear to grow okay as long as they're planted in the early fall. The flower heads aren't as large and picture perfect as those at the market probably due to our intense sun and high day-time temps. The purple varieties and the Romanescos appear to need temperatures that are cooler than we have in Kihei.