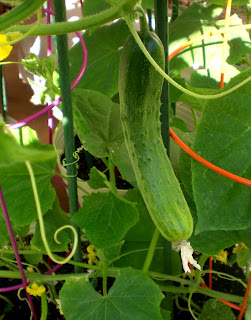 Cucumbers will grow all year in the Kihei climate.
And, it's easy to get them to grow up a 6 foot trellis. 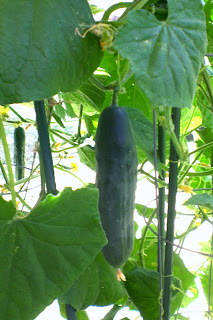 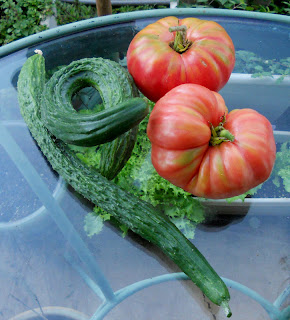 The cucumber that was the most productive in the late fall and early winter months was Suyo, an Asian variety. The vines grew a good deal longer than regular salad cucumbers and seemed to be less sensitive to the diminishing daylight.

I've trailed a number of other Asian/Japanese cucumbers but it was too hot to grow them in Kihei, even during our cooler months. I plant Suyo exclusively from October through December as they've never failed to grow and produce beautiful fruit during the late fall and early winter months. 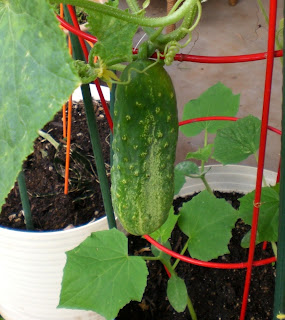 Not all cucumber seeds will grow year round. Some varieties are much more sensitive to increasing and decreasing daylight. Empereur Alexandre seeds germinated but wouldn't grow during the late fall but grew prolifically when seeds were planted in the winter and early spring.

Cucumbers are very susceptible to the ever present powdery mildew in the air here. Even the varieties I've grown that were noted as resistant were affected. 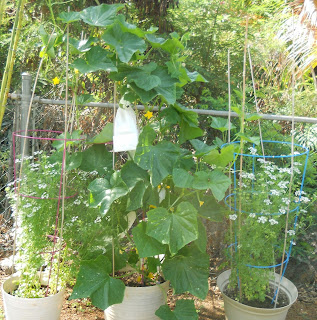 Melon fruit flies and pickleworms are a problem predominately during the spring and summer months. The melon flies don't bother the cucumbers as often as the melons and squash. I put white paper lunch bags around the pollinated females to protect the fruit. Wilted vines or leaves could be evidence of pickleworm activity as pickleworm larvae will tunnel into the vines as well as the fruit. For more information, see my post on Pickleworms.

If the melon fly larvae and pickleworms become a serious problem, parthenocarpic  varieties of cucumbers can be grown under light row covers. These are F1 hybrid cucumber seeds that produce only female flowers and don't require pollination. These types of cucumbers are commonly grown in greenhouses. 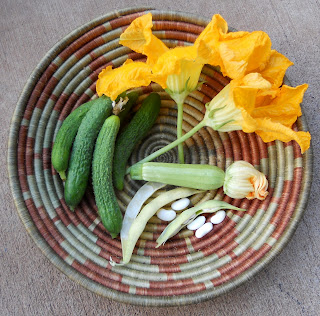 Cornichon is French for gherkin, a miniature cucumber that's used to make a small pickle that's very popular in France. The Parisian Pickling are the smallest cucumber I've grown and they can be used for this type of pickle.

The cucumbers in the photo are around 4 inches long but they can be cut from the vines when they're smaller. When harvested at 4 inches or less, they're seedless and crunchy and they make great pickles. 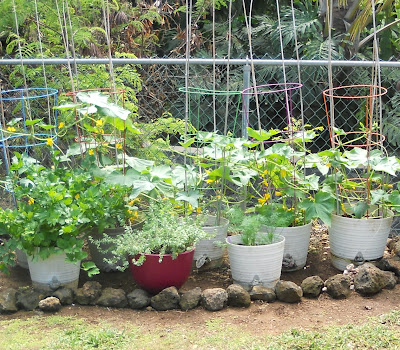 I plant cucumber seeds in large self-watering containers and amend the potting soil with green sand and a organic or natural all purpose fertilizer. I add additional fertilizer at least once per month. When the vines begin to grow the need for water increases significantly. In the summer, if you use self-watering containers, it's a good idea to check the reservoir twice per day.

Unfortunately, self-watering containers are an ideal breeding place for mosquitoes. To control this activity, I block the reservoir opening with a rolled up/compressed plastic bag.

WalMart is the only store I know of on Maui that sells self-watering containers - the painted trellises are available from ACE Hardware.

Cucumbers are delicious when juiced. Sometimes I juice them with other vegetables like celery, carrots and tomatoes when I have an abundance of these vegetables in my garden. And of course they make wonderful pickles.

All of the seeds noted, with the exception of Diva, are available from Baker Creek Heirloom Seeds and Seed Savers Exchange.
Posted by Jane at 2:08 PM