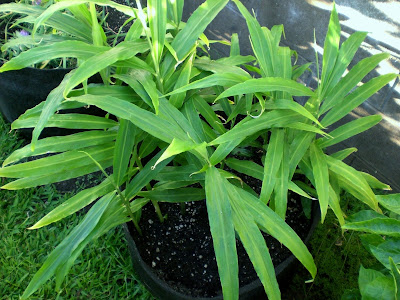 3 Ginger Seed Pieces Growing in a SmartPot
at 4 Months

One of the fond memories I have of living in Kona in the mid 80's was the fresh culinary ginger that some of the local Japanese families grew in their gardens in Holualoa.The young ginger was so tender and such a treat. We sliced it paper thin, marinated it in rice vinegar and ate it with ahi sashimi. Life on the Big Island isn't as quiet as it was then and I've often wondered if anyone still grows culinary ginger in Holualoa. 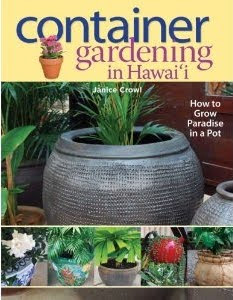 Last year I bought the book "Container Gardening in Hawaii" written by Janice Crowl. Janice is a Big Island resident and her book has lots of info for growing landscape plants, hydroponic lettuce and container edibles. I was so excited when I saw the pages with instructions for growing culinary ginger.

I had no idea that culinary ginger was grown just like potatoes, using small seed pieces of ginger that are hilled as the ginger shoots grow taller. According to the book, the ideal time to plant the seed ginger is in March or April and the mature roots are harvested in December or January. 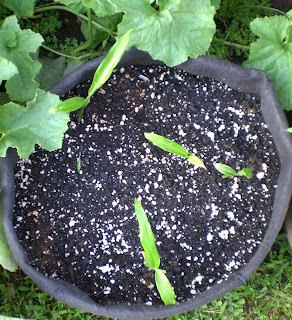 In April, I planted 3 pieces of organic ginger in a 15 gallon SmartPot. I filled 1/3rd of the pot with an organic potting soil amended with green sand and an organic all purpose fertilizer. It took about 6 weeks for the ginger to sprout and emerge above the soil.

Gradually, I added more soil and as the ginger grew taller and by August, the soil was up to the top of the pot. The ginger needed daily water during the summer and monthly applications of an organic or natural fertilizer. It wasn't bothered by any pests and grew well in the hot summer sun. 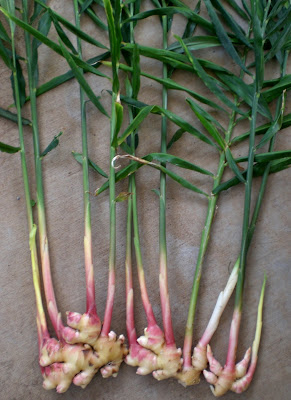 At just over 5 months from planting, the ginger stalks had grown exponentially and were about 30 inches tall. The general recommendation is to harvest new ginger at 5 months.

The pot was full of rhizomes - I was amazed when I dug down with my hand into the potting soil - ginger is more prolific than I realized. If you live in a 4 season climate, you should be able to plant seed ginger indoors in March or April, move the pots outdoors in the warmer weather and harvest new ginger in September.

A vegetable peeler worked great to slice the new ginger. I marinated the slices in rice vinegar but they can easily be pickled in the traditional way with rice vinegar, umeboshi plum and sugar.

Gingers are tropical plants that grow year round in Hawaii so there should be flexibility around the planting months that Janice noted in her book. Organic culinary ginger for planting can be purchased at Mana Foods, Whole Foods and sometimes Down to Earth has organic ginger. I bought a small piece with 3 distinct sections that I broke apart. 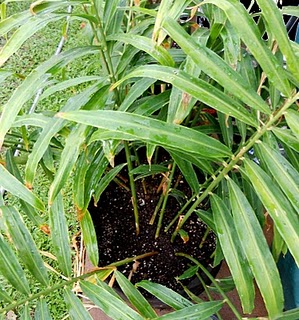 The ginger rhizomes didn't produce any flowers in the fall and that didn't seem to have any negative affect on the final outcome. The stalks began to die back in December and I stopped watering the pot in January. 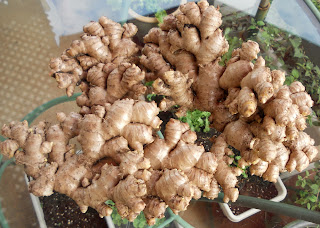 Even though I harvested about 50% of the rhizomes as new ginger, the pot was full of mature ginger in February. The mature rhizomes were more tedious to harvest than potatoes but much easier than harvesting horseradish roots.

Like just harvested potatoes, just harvested ginger isn't ready to sprout. Both go through a few months of dormancy before they'll sprout and grow again. In March of 2011, I planted pieces from the February ginger harvest shown in the above photo and they didn't show any signs of growth until the end of June.

On Maui, organic ginger rhizomes sell for $8/lb at the market. Growing culinary ginger is easy, low maintenance and inexpensive. 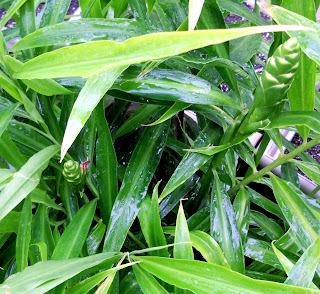 Just Beginning to Flower at 7 Months

In February of 2012 I planted ginger 2 months earlier than I did in 2010. The plants grew taller than previous years and began to flower in September at 7 months. Other than planting earlier, the only other thing I did differently was to add Black Gold Earthworm Castings Blend once a month. The plants began dying back in November and I harvested the rhizomes in December. When culinary ginger produces flowers they look somewhat similar to shampoo ginger. However, culinary ginger flowers are smaller and don't turn red and fill with gel.

How to Grow Ginger
How to Peel, Chop and Grate Ginger