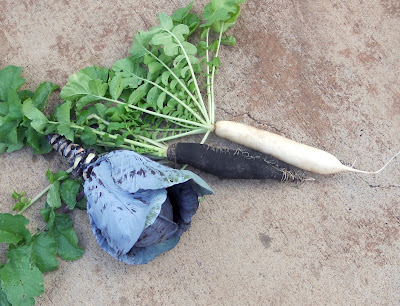 Radishes grow well in Kihei during our coolest months and are best planted from late October through mid-January. Radishes harvested after the temps drop in January or February are usually the sweetest. 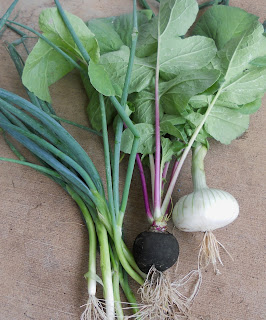 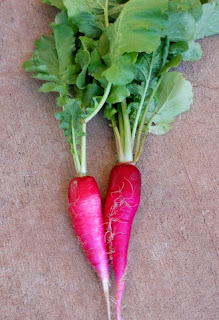 Lungo Rosso Sardo a Punta Bianca is Italian for "Sardinian long red - white tip". Lungo Rosso grew as fast as the White Icicle and can be pulled in about 6 weeks. Lungo Rosso was the most heat tolerant radish I've grown. 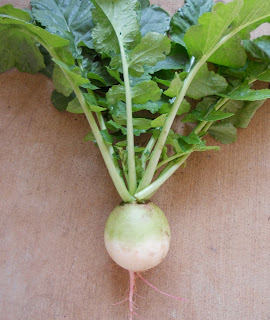 Watermelon is a Chinese radish that's marketed under various names. They're bright fuscia inside and ready to harvest in two months. They aren't as heat tolerant as Longo Rosso. They're naturally sweet and the perfect size radish for a Square Foot Garden. 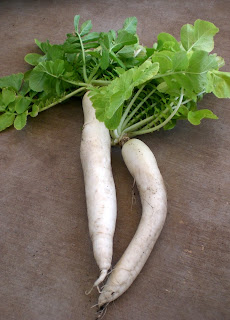 Miyashige is a Japanese daikon and Mooli is an Indian daikon. They're easy to grow and reach 1 foot long in about 3 months. 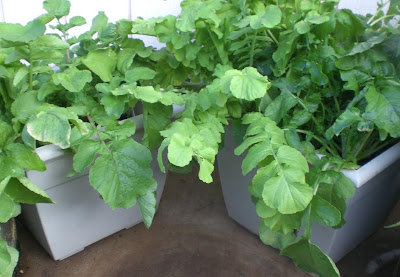 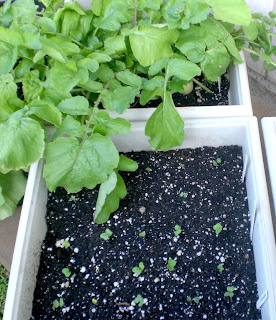 I fill the container up to 2 to 3 inches from the rim with a natural or organic potting soil. Then amend the soil with green sand and an organic all-purpose fertilizer. Radishes usually need daily water and an application of fish emulsion twice per month. I plant most long radish seeds in a 4 row grid.and daikon in a 3 row grid.

Grown in containers, the radishes had no bug problems with the exception of cabbageworms munching on the leaves in January and February. Radish leaves grow fairly rapidly and they aren't the cabbageworms favorite greens so I don't normally cover them.


A great way to use radishes is to slice them paper thin with a vegetable peeler or mandolin and put them in bowl of icy cold salted water or finely grate them and add to salads. Wider radishes can easily be grated in a spiral grater. For a great raw food lunch, grate daikon in a spiral grater, toss with some Hawaiian Alae salt, serve with ahi sashimi, seaweed and sliced local avocado. 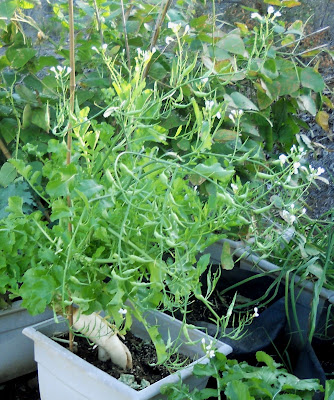 In March I let one of the Miyashige Daikon radishes flower and produce seed pods. The pods look a bit like sugar peas and can be pickled.