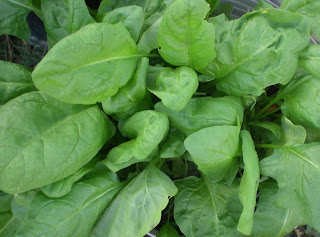 Spinach is a cold tolerant winter vegetable. In a 4 season climate it will grow under a row cover in the snow. Most Hawaii gardeners will tell you that New Zealand spinach is the only spinach that grows in the islands.

I've trialed 8 varieties of spinach and Matador was the only one that was tolerant of the Kihei winter climate. It grew lush green and beautiful spinach leaves all through the winter months and didn't show signs of bolting until April. 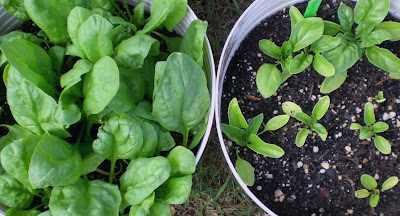 The other varieties of spinach I trialed were America, Bloomsdale, Gigante d’Inverno, Merlo Nero, Monstruex Viroflay and Regiment. They produced plants that looked similar to the Spargo in the above photo.

The best time to plant Matador spinach is from November through February. Seeds can be purchased from Gourmet Seed and Seeds From Italy.

Spinach grows best in the sun and needs daily water. I grow spinach in a container filled with organic potting soil amended with OMRI azomite, green sand and an organic all-purpose fertilizer. I recommend bi-monthly applications of fish emulsion as regular fertilizer helps to minimize the damage from white flies.

The biggest pest that affects lettuce, chard, kale, spinach, Asian greens and cabbage is the cabbageworm, a soft green caterpillar. It's the larvae of a white moth that mates from November through February. I cover the plants with tulle nets or light row cover cloth. I highly recommend covering these types greens and keeping them covered through February as these caterpillars will devour the plants in a short period of time.  For more information, see my post on Cabbagworms.