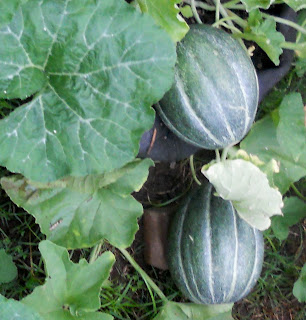 2010 was my 3rd year growing melons but it was the first year I had harvestable, edible melons. The major challenges to growing cucurbits are the melon fruit fly larvae, pickleworms, mosaic virus and powdery mildew. They're all very destructive to the curcubit family of vegetables.

I've posted on the pickleworms and mosaic virus, and I've provided information about the melon fruit fly in my post about winter squash, but I've previously only touched on powdery mildew. 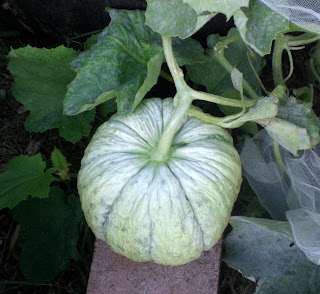 Most melons have vines that are more similar to cucumbers, but their fruit take as long, or longer than winter squash to grow. Keeping the vines alive long enough to produce mature melons has been the biggest challenge to growing melons.

The melon fruit fly mating becomes noticeable at the end of April and this activity continues through the summer.The pickleworms become noticeable in May. Mosaic virus is predominate during the late spring and summer months but powdery mildew spores are always present in the air at sea level elevations on Maui.

To minimize the melon fruit fly and pickleworm damage, and avoid mosaic virus, I've found the best time to start melons from seed is during the last weeks of December through mid-February. Although melon seeds can be planted here during the spring, in a 4 season climate they're planted, and begin their growth, in the cooler temps, and the fruits mature in hot, sunny weather. 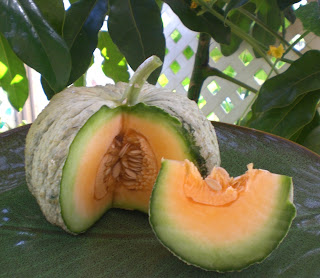 I've trialed many different seeds - heirloom and open pollinated muskmelons, cantaloupes, honeydews as well as some of the hybrid melon seeds that were noted to be powdery mildew resistant.

For powdery mildew, I've tried a number of products for organic gardens and so far, none have made any noticeable difference. Spraying a large garden of cucurbits every few days is a lot of work as well as money. That's why I continue to trial seeds, looking for seeds that are either early enough to out pace the mildew damage, or are resistant enough to the spores to produce mature fruit.

The best results so far have been with Eden's Gem and Hollybrook Luscious: 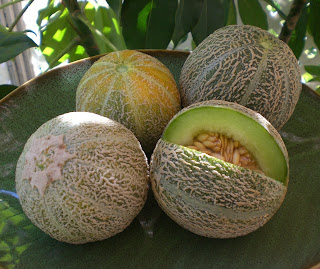 Eden's Gem is a small green fleshed muskmelon that's early and produced mature fruit prior to the vines being totally damaged by mildew. The melons grew well when planted in March but the young plants didn't tolerate the intense sun and higher temps when planted in June. The plants averaged 3 round melons that were 4 inches wide. The fruit slipped from the vines when ripe. 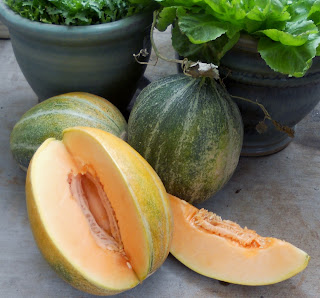 Hollybrook Luscious had hardy, vigorous vines with good mildew resistance. Nothing else I've planted compared to the mildew resistance in this variety. At 60 days, when most melon plants are starting to succumb to the mildew, Hollybrook was just beginning to show the affects in the oldest leaves. Seeds can be planted as late as May with good results. The plants averaged 3 melons - the largest was 9 inches long by 7 inches wide. These melons slip from the vine when ripe.

All of the melons I've been able to grow to maturity haven't been that luscious or sweet. Some gardeners recommend withholding water from the plants a week prior to harvest to increase the sugar levels but that point isn't easy to determine. Each year I get better at growing melons and I'll continue to update this post as I learn. 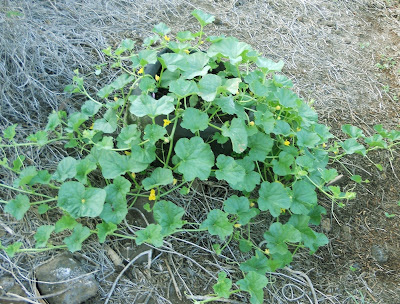 I've been growing melons in 15 gallon Smart Pots filled with natural and organic potting soil. Before I direct sow the seeds, I amend the potting soil with green sand and an organic or natural all purpose fertilizer. I grow 1 plant per container and add additional fertilizer after 1 month, continuing to add fertilizer at a minimum of 1 month intervals until the plant starts to die back.

I cover all the pollinated females with white paper lunch bags, even before the melon fly mating season, until they're too large to fit and then I cover them with fabric shopping bags. Melons are so precious in my garden that I normally don't let them grow uncovered.

How to Tell When Melons are Ripe