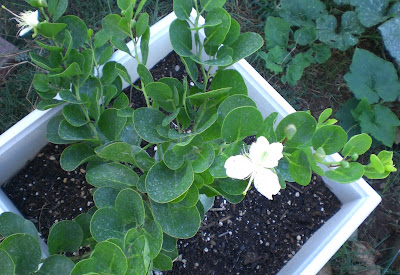 A Caper Plant 6 Months From Germination

Olives are grown in Kula but the Kihei winter climate is too warm to trigger olive trees to produce fruit. However, the hot, dry climate in Kihei is ideal for growing capers.

Michelle, the author of From Seed to Table, has written a detailed blog page about her experiences growing capers in the coastal region of central California.
fromseedtotable.blogspot.com/p/my-caper-obsession.html

There's a wealth of information on Michelle's page, including various ways to cure and preserve the capers. If you're interested in growing capers, I highly recommend checking out this link as my post will provide only an overview and information specific to growing capers in the Kihei climate. 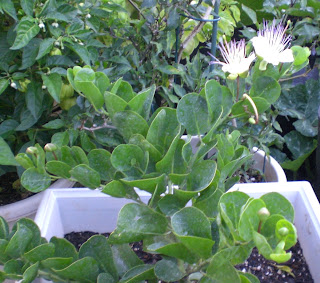 Caper bushes produce two culinary items, caper buds and caperberries. The caper that's used in American cuisine is the caper bud. If the caper buds aren't cut from the plant, they'll produce a lovely white, or sometimes orchid-pink, flower. The flower develops into the caperberry - an elongated, tear drop shaped fruit - similar to an olive in size. 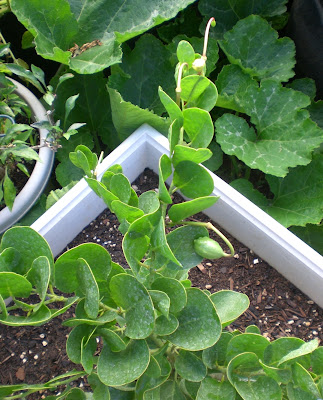 The caperberry is common to Spain - it's used in appetizers, antipastos and even in martinis. The Whole Foods olive bar is the only place I've seen caperberries on Maui.

Capers can be grown from seeds or cuttings. I grew the caper plants in the photos above from seeds obtained from Gourmet Seed and Seeds From Italy. There were instructions with the seeds for germinating them in the refrigerator. I wasn't successful with this method as it takes some serious diligence. 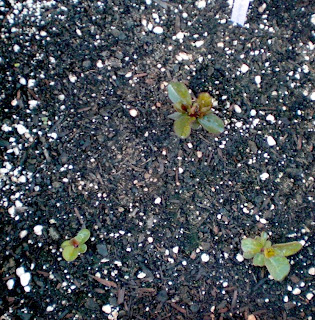 In November of 2009, I planted caper seeds for the first time. In April, the caper seedings began to grow - the largest of the seedlings was the width of a quarter.

Caper seeds have a low germination.and the seedlings grow very slowly at first. Out of 16 seeds planted in November 2009 only 3 germinated the following April. I had better results from the November 2010 planting as in April 6 seeds germinated. Then I planted seeds in January of 2012 and 2 germinated in April and 2 in May. 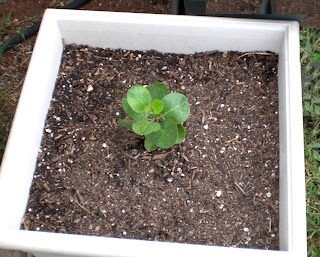 A Transplanted Caper Seedling in June 2010

When the seedlings are the size of a quarter they can easily be transplanted without disturbing the roots. 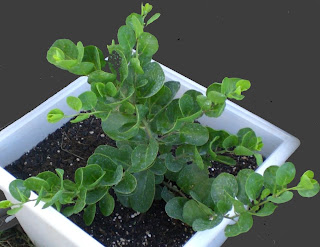 At 8 weeks from transplanting, the caper seedlings had grown exponentially. 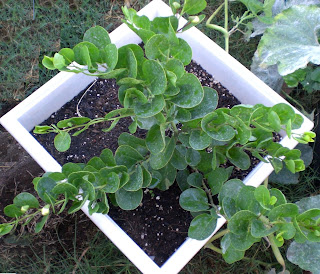 In August this plant was producing it's first caper buds. The plant continued to bud and flower until the autumn equinox.

Most information I've found on growing capers recommends planting seeds in November. Since we don't have a 4 season climate in Kihei, there may be some flexibility as to planting times. However, it does appear that the seeds germinate in April and May. My caper plants were noticeably influenced by the seasonal sun changes. 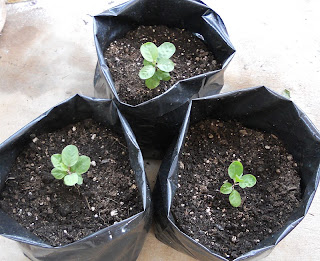 I've also transplanted the small seedlings into 1 gallon size plastic plant bags filled with potting soil. After the plants have been growing for a few months, it's easy to cut the bags and slide the plant and soil into a container or into the ground. I've had good success with this method as it doesn't disturb the root system.

At this time, all of my caper plants are growing in 12 gallon containers filled with an organic potting soil. I amend the soil once a month with an organic all-purpose fertilizer. So far, the plants have not been bothered by any pests. 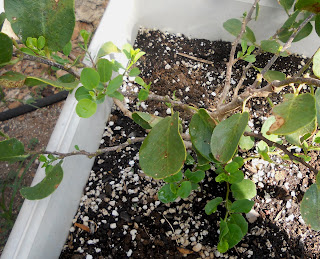 The plant above was dormant from the fall equinox until the beginning of February when new growth began at the soil line. At the end of March, nodes on some of the branches started to develop and within two weeks the new growth was significant. 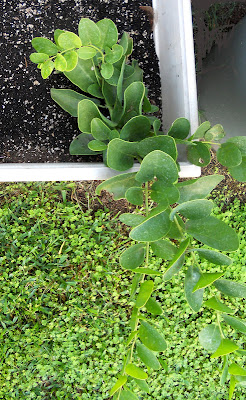 After 3 years of growing capers I can say they are not the easiest plant to grow from seed or to keep alive. It seems when the seeds are planted outside in November or December that April is the month they germinate. The seedlings grow very slowly at first and then exponentially. Some plants produce caper buds during their first summer and others don't produce until the following spring.

So far, all of the caper plants that have produced a crop of capers have died before producing again the following year. This might be because they're planted in plastic containers. In 2012, I transplanted the seedlings in to 15 gallon Smart Pots.

I've been curing the capers in the salt brine that Michelle recommended on her blog. Then I transfer them into a jar of sea salt and let them dry in the refrigerator. The caper buds don't taste very good right off the plants but they're delicious when cured in salt.

Here's another method for salt brining:
Preserve Capers in Salt

Capers bushes can be grown from cuttings.
A Simple Way to Root Plants From Cuttings
Dr. Ken Mudge on Cutting Propagation

Interesting information regarding the history of capers:
http://www.napoleon-co.com/pages/product_pages/capers.html

Photos of beautiful plants grown on a caper farm in Greece:
Capparis-Spinosa

An indigenous wild caper plant native to the Hawaiian Archipelago:
The pre-contact Hawaiians didn't eat the caper buds or berries.
It's unknown if the species is edible.
Capparis Sandwichiana

And, a cool video on how to make Caper Butter.