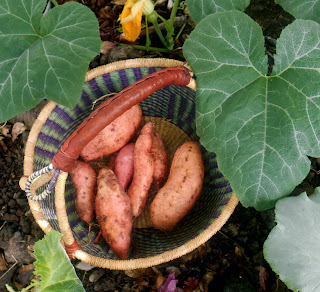 Sweet potatoes are native to the tropics and need warm sunny conditions in order to grow.
In Hawaii they can be planted at any time during the year. 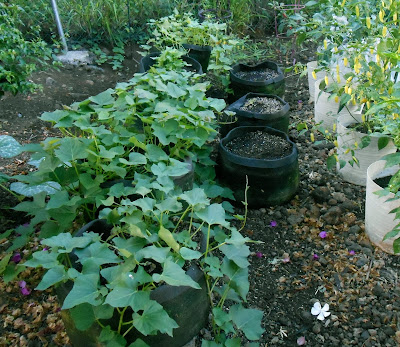 It would seem that sweet potatoes should be easy to grow in Kihei but after three years I still haven't mastered them. Although they will grow during the hot summer months, my best results were from slips that were planted between October and December and harvested in the winter/spring. Sweet potatoes need at least four months to grow large enough to harvest. 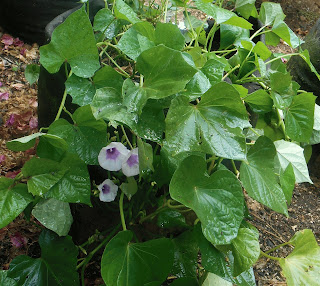 Some Varieties Produce Flowers
Young sweet potato leaves are edible and can be used like spinach. 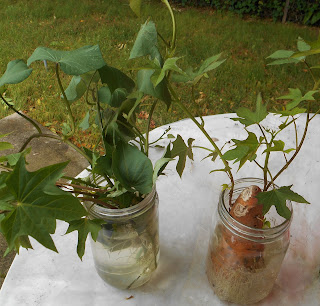 Sweet potatoes are grown from slips - the vining leaves that sprout from a sweet potato that's placed in water. They can be ordered online in the late spring or you can grow them yourself. The problem I encountered when purchasing online was that there were countless names I had never encountered at the market. Unfortunately, the slips I chose produced tubers that were starchy rather than sweet and it was a waste of money.
I use a paring knife and dig into the sweet potato just below the slip to remove it. You can see the scars on the garnet sweet potato in the above photo where the slips were removed. Then I put the slip directly into the jar of water and let it develop some roots. 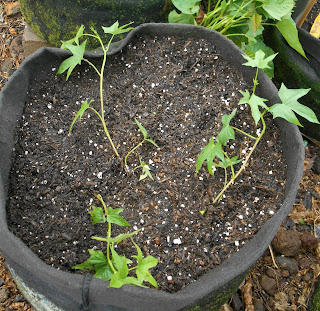 Just Planted Garnet Slips
As soon as roots develop, I plant the slips into the potting soil. I normally plant 3 to 4
slips in a 15 gallon container. 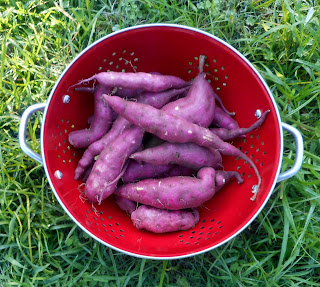 Some varieties need a lot of space to vine and don't grow very well in containers. Because I'm growing them in 15 gallon Smart Pots, most of the sweet potatoes I've harvested weren't very large even when I let them grow for 6 months. 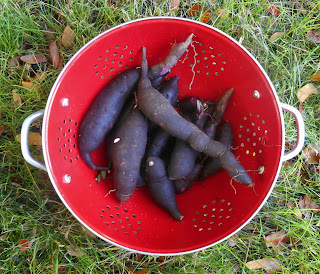 The orange sweet potato, in the top photo, was one with no name from Whole Foods. I wasn't successful at growing Hanna Sweet or Okinawan as they vined heavily and weren't suited to container growing. Unless you're familiar with a wider range of sweet potato varieties than are typically available on Maui, I recommend growing your own slips from your favorite varieties available locally. 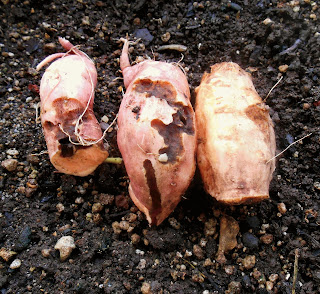 In my garden, pickleworms, slugs and snails were the problem pests. The pickleworm is active during the summer months and they will dig under the soil and eat the tubers. The snails and slugs eat the leaves which wasn't a big problem until this year when Rat Lung disease became an issue on Maui.

Sweet potatoes when grown in the ground can be very invasive - similar to horseradish or mint. After I harvest them from the containers I don't have to replant slips as they will regrow just from the stringy roots that remain in the soil.