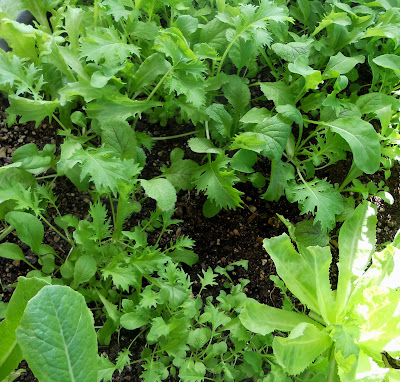 An Assortment of Micro-Greens

Normally I don't plant salad greens from May until October as they don't tolerate the 85+ degree temps and the intense summer sun. The hot sun stresses the seedlings and that attracts white flies and leaf miners that suck the pigment from the leaves. Also, many salad greens bolt early or become bitter when grown in the heat.

This summer I trialed some of my more heat tolerant salad green seeds, sown densely as micro-greens, and planted in diffused light conditions. They had a few hours of sun in the early morning, diffused light and shade the remainder of the day. Surprisingly, some of the seeds I trialed grew well and weren't bitter when harvested as baby greens. 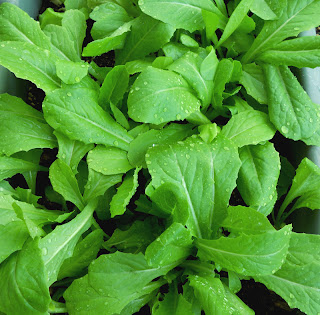 Any type of celery works as a micro-green - it isn't bitter in the seedling and early stages of growth. Celery takes 2 to 3 weeks to germinate and is very tiny at first. I planted it separately from the other greens.

The chard I planted was Flamingo - a small colorful heat tolerant variety.

I grew the greens in containers under a trellis that covers the lanai on the east side of my house. I mixed Black Gold Earthworm Castings, OMRI azomite and green sand into the potting soil and watered predominately in the evening to cool the soil lower at night. I sowed seeds as a mix and also in sections as some grow faster then others. The greens had minimal insect damage and in 3 weeks they were large enough to cut for salads.

As I trial more salad green seeds through the summer I'll update this seed list.