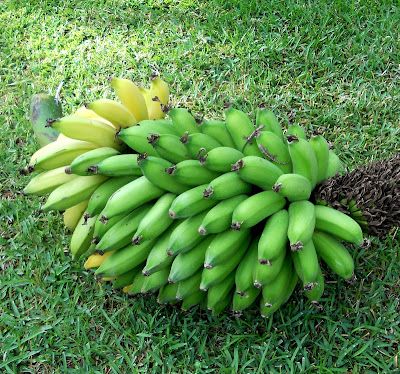 The first Dwarf Apple banana I attempted to grow was a young plant from Plant It Hawaii that I purchased at one of the Kahului garden centers. I planted it in a 30 gallon container - don't believe anyone if they tell you a Dwarf Apple banana plant can be grown in a container. It didn't take long for the roots to outgrow the cramped space and the banana plant to begin to die. But, it produced a keiki or baby plant and I cut down the parent and transplanted the banana keiki into the ground. 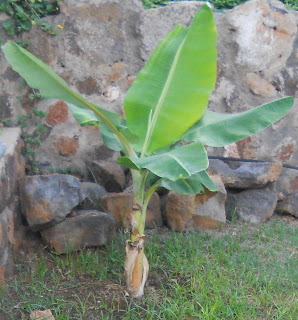 At 2 weeks from transplanting.

On August 4th, 2011, I planted the keiki in a hole amended with a lot of compost and a generous amount of an organic all-purpose fertilizer. 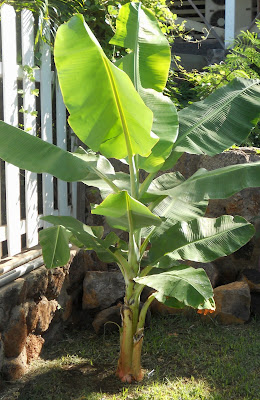 At 2 months from transplanting the plant was growing vigorously.

It doesn't take long for a small banana plant to produce corms. If they aren't removed the planting area will become seriously over-grown with keiki banana plants before the parent plant produces any fruit.

I use a pic-ax to remove the corms unless I'm going to transplant one. I like to transplant them into a pre-dug area rather then let them grow next to the parent plant. From my experience, they're rooted better into the ground. If a banana plant isn't properly anchored it can blow over in a strong gust of wind or fall to the ground due to the weight of the bananas. 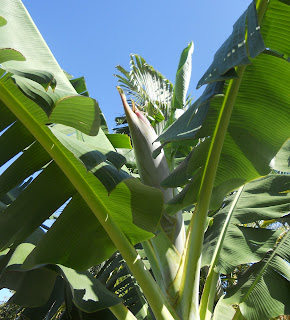 At 6 months from transplanting, the flower stalk started to emerge.

When the flower stalk began to emerge, the banana plant was over 7 ft tall at the center and the tops of the leaves were over 11 ft from the ground. No wonder it couldn't be contained! Dwarf Apple Banana plants are a lot shorter than the regular bananas like Cavendish. 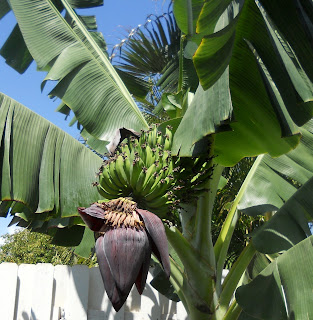 At 7 months the baby bananas were developing.

At 11 months the bananas were getting heavy but the tree
appeared to be well rooted in the ground.

What I especially like about growing dwarf bananas is that everything about them is manageable. I don't have to recruit anyone to help me cut down the banana stalk or to cut down a 20 ft tall plant after the bananas are harvested. A bunch of Cavendish bananas can weigh 50 lbs and usually requires a ladder in order to cut them down. I didn't weight the Dwarf Apple bunch after I cut it but I would guess the weight to be around 25 lbs. 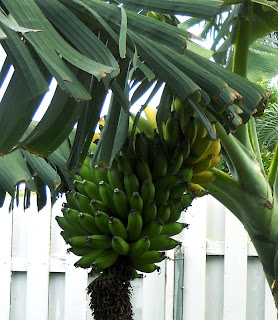 And on July 28th, 2012, almost 1 year from transplanting, the top bananas began to turn yellow - the bananas were ready to harvest.

I decided to plant dwarf varieties of bananas because my patch of Cavendish bananas were way too tall and blocking my neighbors view. I cut them down and dug them out twice but they grew back. Eventually I had to hire a landscape person to dig them out completely. Bananas should be managed and maintained or they become over-grown and invasive like ginger.

Bananas are bothered by several pests and diseases. Aphids and white flies go for the older leaves. I hose the under sides of the lower leaves with water to remove as many aphids as I can and I cut the leaves off as they get older. There's an aphid that causes "banana bunchy top virus". So far, none of the banana plants I've grown over the last 6 years have had this disease. If my plants were to contact this virus I would dig the infected plants out completely but I would not use the recommended toxic herbicides.

There are differing opinions about fertilizing bananas. I've been giving the plants a generous amount of an organic all-purpose fertilizer and compost once a month. Supposedly, fertilizer encourages the plants to grow taller. In my opinion, the quality of the fruit improves when the plants are well watered and well fertilized.

When the bananas are harvested the hands tend to ripen all at once. There are several ways to preserve a banana harvest. I freeze ripe peeled bananas for making smoothies and banana bread or slice them vertically and dehydrate them. Another way to use perfectly ripe, unpeeled bananas is to grill them and then slit the husk or skin open vertically on one side and eat the cooked fruit from the husk with a spoon. Grilled bananas are so ono especially over vanilla ice cream.