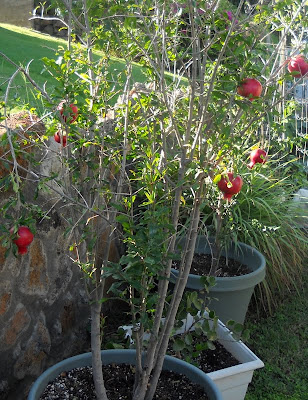 If you don't have a large yard, trees present lots of challenges when they're planted in the ground. They can take up a good deal of space, grow too tall to pick or protect the fruit and block the neighbors ocean view. 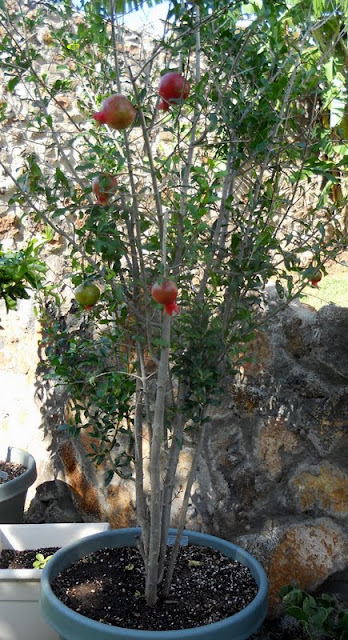 In February of 2009, I planted my first baby Angel Red in a 30 gallon container. The following summer it produced a few flowers but they dropped off the branches before developing. In January of 2011, at 2 years from planting, the tree was full of blossoms and many developed into fruit.

Pomegranate trees don't normally blossom until late April or May. The fruit were ready to harvest in 4 to 5 months. Commercially grown pomegranates are harvested before they're fully ripe and they tend to have lots of under developed seeds and taste rather astringent. When harvested at their peak, pomegranate seeds are luminous and luscious.

Pomegranates are more of a bush than a single trunked tree. When grown in orchards for commercial production, the trees are normally pruned to a single trunk. Since I'm growing them as low bushes, I let 4 stems develop during the first year and since then I've pruned all the new suckers from the base. 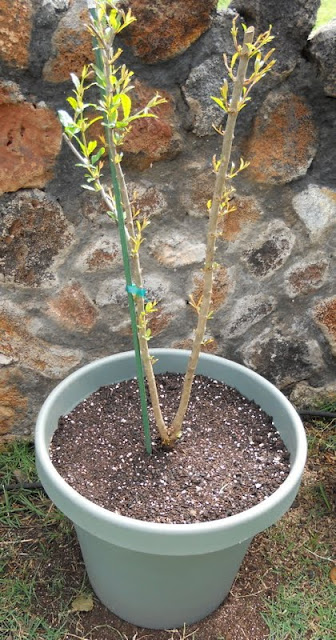 In February, Kula Hardware brings a in a variety of bareroot pomegranate trees from the Mainland. They keep a call list and it's a good idea to reserve your tree or trees in advance. Angel Red is grown commercially for pomegranate juice and the fruit are absolutely ono. Kula Hardware usually has potted Angel Red trees throughout the year.

Another source for bareroot trees is Bay Laurel Nursery - they begin accepting orders in September. They have a larger selection of pomegranate and other fruit trees but a minimum shipping charge of $50. It works out if you're ordering 4 or 5 trees as their retail prices are somewhat lower than Kula Hardware and it offsets some of the shipping cost.

I strongly recommend having a place or a container prepared for the bareroot tree or trees prior to their arrival. Plant them as soon as possible as bareroot trees dry out rapidly in the warm Kihei climate. More information about planting bareroot trees can be found in my post on growing Potted Fruit Trees

I plant trees in the largest containers I can purchase locally. They're from Home Depot and are a regular stock item. To fill one, it takes at least 2 cubic feet of potting soil. I use an organic or natural potting soil and amend it with green sand and an all purpose natural or organic fertilizer.

Pomegranates are drought tolerant when grown in the ground but in a container they need a significant amount of water as the soil drys out rapidly especially during the hotter months. I fertilize the trees with a natural or organic fertilizer at least once a month. After the fruit were harvested, I pruned the tree a little, removing any dry leafless branches. The trees tend to lose leaves during the hot summer and through the fall.

Pomegranate trees are self-fertile but I've read that they produce more fruit if at least 2 trees of the same variety are planted. Our local bees like pomegranate blossoms. 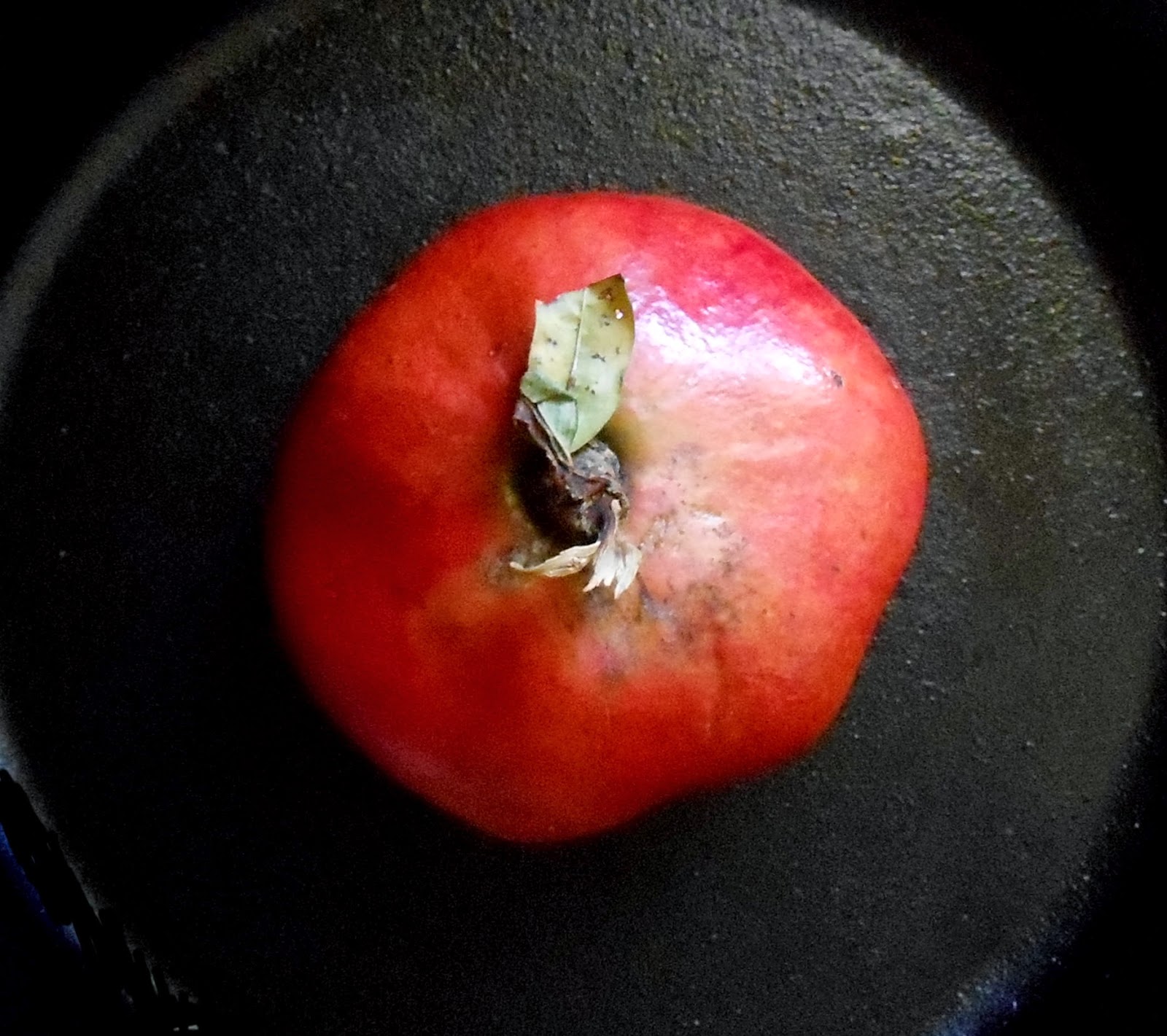 Parfianka
The recommendation for harvesting the fruit is to wait until they crack. This might work on the Mainland but in Kihei the fruit didn't crack. I harvested the fruit in early to mid-May when they were really red and they felt slightly softer when squeezed. Those pomegranates were consumed so fast - next year I'll try to post photos of the ripe fruit.

A wonderful book written by Dr. Gregory Levin who preserved the world's largest collection of rare pomegranates on an agricultural station in Turkmenistan:
Pomegranate Roads: A Soviet Botanist's Exile from Eden

More information and recipes for pomegranates:
Pomegranates
How to Cut and De-seed a Pomegranate